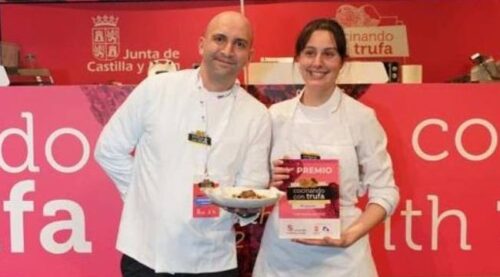 Soria, Spain, April 26, 2022 / TRAVELINDEX / The World’s largest truffle tasting event was held in Soria earlier this year. An international jury evaluate the teams. A special prize called “Pequetrufa” was be awarded by a children’s jury. The contest had parallel activities open to all audiences. The objective was to position at an international level, the truffle in Castilla y León, a leading community in myco-tourism.

The acting Minister of Education, Rocío Lucas, accompanied by the president of the Soria Provincial Council, Benito Serrano, and the Councilor for Tourism of the capital of Soria, Yolanda Santos, presented the III International Contest “Cooking with Truffles”, which was be held in Soria.

The international competition, organized by the Government of Castilla Y Leon with the collaboration of the City Council and the Provincial Council of Soria, has as its objective the dissemination of a mycological product such as the truffle, one of the most emblematic of haute cuisine, appreciated by chefs all over the world and especially in the province of Soria, with the largest truffle farm in the world, with more than 600 hectares of mycorrhizal oaks.

Rocío Lucas has presented this new edition, framed in the International Gastronomy Festival of Castilla y León, which alternates every two years with the International Contest “Cooking with Truffles” and the International Congress of Mycological Cuisine “Soria Gastronómica”, which will be held in autumn of the next year. The Minister highlighted “the important effort made by the Board in the organization of both events, which are helping the international positioning of mycotourism in Soria and Castilla y León as a great reference, while at the same time betting on its repercussion at the tourist level, through the promotion of gastronomic products in which Castilla y León maintains an important leadership”.

The III International Competition “Cooking with Truffles” reinforces, in the words of the Minister, “the commitment to the gastronomy of Castilla y León, as well as the determined support for all professionals in the sector, with a defined strategy based on specialized tourism products of quality that are also sustainable with the environment”. In this sense, it must be remembered that the annual economic impact of myco-tourism in Castilla y León is estimated at around 33 million euros, with more than 250,000 myco-tourists per year at harvest time in the community, according to the latest data published by the Fundación Cesefor.

International competition
The III International Competition “Cooking with Truffles” took place in Soria with different promotional activities open to the public, with the culinary competition at the Palacio de la Audiencia, with the participation of eight teams of top-level chefs from Italy, Ecuador, Thailand, USA, Mexico, Slovenia, France and Spain.

The representative of the Spanish team was be the Soria chef Juan Carlos Benito, trained at the Soria School of Hospitality, currently responsible for ‘Grumer Catering’ and winner, on several occasions, of the first prize at the Abejar Truffle Fair. Giuseppe D’Errico, with two Michelin stars, participated from Italy; Representing Ecuador was be Alejandro Chamorro, who has entered the list of the 50 best restaurants in Latin America; Anthony Burd of Tony’s restaurant in Bangkok represented Thailand. From the USA, the Top Chef Masters competitor, chef Debbie Gold, participated; Eduardo Morali has been runner-up in Top Chef Mexico; Jure Dretnik, chef de cuisine at the two-Michelin-star restaurant Hiša Franko, represented Slovenia; Lastly, Nicolás Pailhes represented France, where he runs a restaurant in Richerenches, capital of the black truffle.

In addition, enhancing the marked international character of the event, a professional jury has been selected, with personalities of great relevance in world gastronomy such as Clare Reichenbach, Chief Executive Officer of the renowned James Beard Foundation, which bestows the most important culinary awards in the United States; Colombian chef Leonor Espinosa with her restaurant LEO, distinguished among the best restaurants in the world; or the Galician and one of the most influential chefs in Spain, Lucía Freitas, with a Michelin star. Also part of the jury are television chef Javier Peña; the chef from La Mancha Fran Martinez, with two Michelin stars and the champion of the previous edition of Cooking with Truffle and runner-up of Top Chef Spain, Antonio Arrabal.

The winning team of the Competition received the title of “World Truffle Cooking Champion” and an cash prize of 4,000 euros. In addition, the second place received a prize of 2,000 euros and the third place got 1,000 euros. As a novelty, the ‘Pequetrufa’ award has been established, and was awarded by the children’s jury to the best chef, receiving a prize of 1,000 euros.

Soria’s restaurants was invigorated as well as the province’s hotel professionals, creating possibilities for future exchanges, as well as enriching relationships between chefs. The participating restaurants were: La Galiana, La Taberna del Kiosco, Mesón Castellano, El Trashumante, La Lobita, La Chistera, El Baluarte and the Parador de Soria. This activity is carried out in collaboration with the Association of Hospitality and Tourism Entrepreneurs of Soria, ASHOTUR.

Truffle Technical Conference The Aula Magna Tirso de Molina, a Technical Conference was aimed at professionals in the kitchen, the press and the general public, to promote the responsible use of the black truffle in restaurants and at a private level. Within the Conference, quality control was carried out on the black truffle that were used in the International Competition “Cooking with Truffles” and that were provided by the Association of Black Truffle Collectors and Growers of Soria, ATRUSORIA and the Association Forest of Soria, ASFOSO.

Through this Technical Conference, the organization of the International Competition “Cooking with Truffles” has established a rigorous quality control, carried out by independent professionals, so that all the contestants had homogeneous specimens of truffles and in perfect conditions, taking care of aspects such as the roundness, maturity or weight of the product.

Promotion of ‘Trufi-Tourism‘ With the aim of involving all citizens, different activities have been scheduled around the truffle, such as two “Truffle Trails”, consisting of an informative talk on the truffle ecosystem and a practical outing to a truffle plantation. The objective is to be able to visit a truffle farm with the help of an expert, where there will be a truffle hunting demonstration.

In addition, together with the truffle growers’ associations: ATRUSORIA and ASFOSO, a ‘Truffle Market’ was be organized in the Palacio de la Audiencia, to promote and market the product, aimed both at the final consumer and at the professionals of the sector who attended participated in a commercial meeting with the truffle growers at the end of the Technical Day of truffle selection.